Outside of the larger subdivisions or new suburbs it seems that blocks of land can take a long time to sell and it may just be due to a real failure in the marketing of many agents.

Big carve ups of land by big developers bring big budget advertising, government controlled pricing and an inevitable rush to snap up a block.   But individual allotments in established suburbs often experience long delays in selling that are not all due to over pricing.

If you have ever searched for a house to buy it soon becomes apparent that certain properties are difficult to assess due to the lack of information supplied that you tend to pass them by.   It can be hard to even work out what is included with some sales.   Photos can be too selective or too complimentary to make a rational decision.   Not even a floor plan is available in many cases.   Sure you could go have a look but you can’t see them all so only the most interesting get a place on the weekend inspection list.

It’s even worse for the sale of land.   Most blocks for sale will only have a site plan with measurements and the most vague or glamorised description.

If it is within 1km of the ocean you may get a photo of a seagull on the beach or maybe the best local attractions.

But what people really want to know is; let’s see the land now; is there a slope; what is the street like; what are the neighbours like; are they nice people; what does it feel like to be there?

You can never answer all of these questions but at least agents should make an attempt.   The name of the game is to get people interested enough to look further.

We recently had for sale 2 blocks of land at Russell Street Magill.   It was a subdivision of a block of land that had an old 1950’s fibro or asbestos 2 bedroom home with nothing much to attract anyone.

Once the tenants leave, the house will be demolished, land will be subdivided and 2 vacant blocks will be sold separately.

Question:  So what would you do to sell this land? 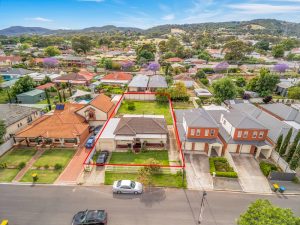 For just $220 we got some awesome shots above the property taken with a drone that made it very clear what the area had to offer.

Buyers were able to clearly make a judgement of the area and even precisely select which block they wanted based upon these photos.

Someone asked if there were any significant trees that might inhibit development so we only had to refer them to the photos online which spoke for themselves.   Of course they drove past later but no one needed to even enter the property which was still leased to tenants.

Bottom line is that within 12 hours of posting the 2 blocks for sale online it was all over but the shouting!   Only the contracts and other paperwork had to be completed before we slapped on an ‘UNDER CONTRACT’ sticker over the signboard.

Some signboards almost rust out before a property is sold but not these.